Officer Nick Wilde is a Costume Change Disc which, when placed under Nick Wilde on the Disney Infinity Base, changes his appearance to his officer's uniform from the Disney movie Zootopia. It may NOT be used in Editions earlier than 3.0.

It was revealed by a leak on August 22, 2015 and is available in the Zootopia Power Disc Pack. 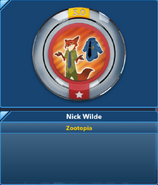 Hall of Heroes image from 3.0 with empty description 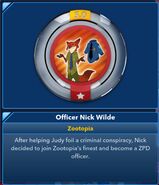 Hall of Heroes image from 3.0 after update

Nick Wilde with his Officer Nick Wilde uniform
Add a photo to this gallery
Retrieved from "https://disneyinfinity.fandom.com/wiki/Officer_Nick_Wilde?oldid=137801"
Community content is available under CC-BY-SA unless otherwise noted.