Olaf appears in the Disney film, Frozen. He used to be a character made up by Anna and Elsa in their childhood, but later came to life. He helps Anna, Kristoff and Sven get to Elsa and bring back summer. Olaf is very carefree, friendly, and oblivious to some things. He has always loved the idea of summer, but isn't aware that he could melt in the sun. 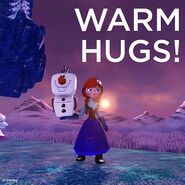 Add a photo to this gallery
Retrieved from "https://disneyinfinity.fandom.com/wiki/Olaf_Costume?oldid=94544"
Community content is available under CC-BY-SA unless otherwise noted.