Start a Wiki
"A fun-loving prodigy with big ideas who refuses to let a moment of his summer vacation go to waste."
--Hall of Heroes statue inscription

Phineas (aka Phineas Flynn) is a character from the Disney Channel Phineas and Ferb series. None may be used in:

He was exclusively released at GameStop March 14th 2014[2] and was officially released April 1st 2014[3] with Perry the Platypus in a Toy Box Pack.

Phineas has his own adventure called "Phineas' Pinball Mania" in which the player must help Phineas use his creativitoys to play a giant game of pinball while defeating enemies. In the toy box, Phineas has a total of 5 character chests, having the second most chests, only behind Ralph. When opened, his Character Chests unlock a Phineas Costume, Ferb Costume, Candace Costume, Baseball Shooter and Phineas and Ferb's Water Slide.

In the first game, Phineas' Default skill is "Tuck 'n' Roll" and his default Tool is the Baseball Shooter.

In the second game, Phineas retains all his abilities from the original game, plus a Skill Tree and a Street Spike ability. His Special Abilities include "Marksman", "Super Jumper", and "Tech Specialist".

For more quotes from this character, see Phineas/Quotes. 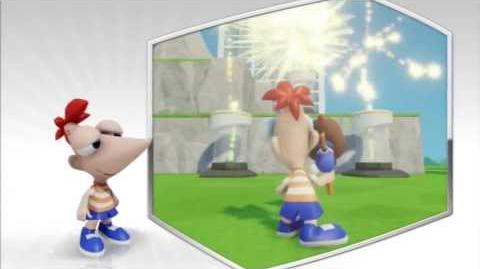 Disney Infinity Phineas Figure
Add a photo to this gallery