Pizza Planet Delivery Truck is first available in Disney Infinity 1.0. It's a Ground Vehicle that can be used in both the Toy Box and the Toy Box Speedway expansion game by placing the hexagonal Power Disc on the Disney Infinity Base. When riding the vehicle, rock music plays. 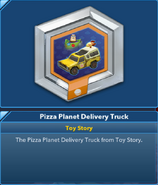 Hall of Heroes image from 3.0, showing the rocket behind the driver's seat

Sorcerer's Apprentice Mickey driving the truck.
Add a photo to this gallery
Retrieved from "https://disneyinfinity.fandom.com/wiki/Pizza_Planet_Delivery_Truck?oldid=132301"
Community content is available under CC-BY-SA unless otherwise noted.