Start a Wiki
"Poe is the best man for any Resistance mission in his sturdy flight jacket."


Poe's Resistance Jacket is a Costume Change Disc which, when placed under Poe Dameron on the Disney Infinity Base, changes his appearance to his Resistance jacket from Star Wars: The Force Awakens. It may NOT be used in Editions earlier than 3.0.

It also has a unique new ability to give the chance to reflect damage back to an attacking enemy, similar to the "Sorcerer's Shield", "Lightning Shield" and "Ultimate Evil" Power Disc Alchemy Combinations. 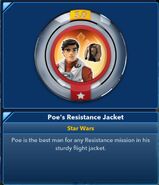 Poe using the disc in the 3.0 Hall of Galactic Heroes
Add a photo to this gallery
Retrieved from "https://disneyinfinity.fandom.com/wiki/Poe%27s_Resistance_Jacket?oldid=134623"
Community content is available under CC-BY-SA unless otherwise noted.