Princess Leia's Boushh Disguise is a Costume Change Disc which, when placed under Princess Leia on the Disney Infinity Base, changes her appearance to her bounty hunter disguise from Star Wars Episode VI: Return of the Jedi. It may NOT be used in Editions earlier than 3.0.

Its secondary ability (that any player can make use of) is a chance to create an energy shield around the player any time they are attacked. If this shield appears, the attack will do no damage to the player. It was revealed on Toy Box TV Live. 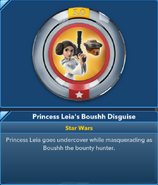 Princess Leia with the outfit
Add a photo to this gallery
Retrieved from "https://disneyinfinity.fandom.com/wiki/Princess_Leia%27s_Boushh_Disguise?oldid=134654"
Community content is available under CC-BY-SA unless otherwise noted.