Start a Wiki
The Race to Space Toy Box Pack is a Toy Box Pack in Disney Infinity 1.0. It includes the Infinite Crystal Series versions of Buzz and Lightning McQueen. It was first released on November 5, 2013 in the USA. The Toy Box Pack sells for $30.99.

The Toy Box Pack was revealed on September 13, 2013 when a Canadian Toys "R" Us listed the pack for preorders in a store catalog.[1][2] On October 25, 2013, it was revealed that the pack would be coming to the U.S.; this information came from an image of a page from the Toys "R" Us Toy Book, leaked by BFads.[3] 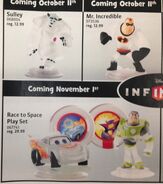 Zoomed in newspaper ad
Add a photo to this gallery

Retrieved from "https://disneyinfinity.fandom.com/wiki/Race_to_Space_Toy_Box_Pack?oldid=128349"
Community content is available under CC-BY-SA unless otherwise noted.