It is an almost exact replica of Radiator Springs as it appeared in the movies. Several famous locations like Flo's V8 Cafe, the Cozy Cone Motel, Luigi's Casa Della Tires, the outskirts and various other locations appear. The environment has been adjusted so you can race in it. Many jumps have been placed like the big one at Flo's V8 Cafe, and some that will allow you to ride on the rooftops of buildings.

A big jump in the outskirts. 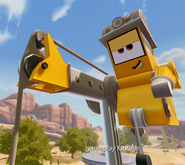 Concept art of an overhead view of the town.
Add a photo to this gallery
Retrieved from "https://disneyinfinity.fandom.com/wiki/Radiator_Springs?oldid=129403"
Community content is available under CC-BY-SA unless otherwise noted.