In some combinations with a second Ability Disc, a third Ability may be provided. 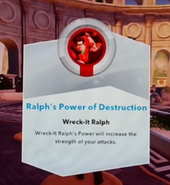 Hall of Heroes image from 1.0 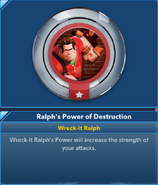 A prototype version of the power disc, showing Wreck-It Ralph's concept art.
Add a photo to this gallery
Retrieved from "https://disneyinfinity.fandom.com/wiki/Ralph%27s_Power_of_Destruction?oldid=132302"
Community content is available under CC-BY-SA unless otherwise noted.