Ramsey is a character in the Disney/Pixar film The Good Dinosaur. She is a dinosaur, and appears as a mount in Disney Infinity: 3.0 Edition. She was originally confirmed by at the 2015 D23 Expo as apart of the The Good Dinosaur Power Disc Pack.

She has interactive dialogue with Spot when they are on the base at the same time. 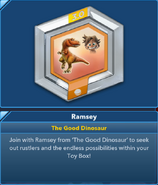 Hall of Heroes Image from Version 3.0
Add a photo to this gallery

Retrieved from "https://disneyinfinity.fandom.com/wiki/Ramsey?oldid=123734"
Community content is available under CC-BY-SA unless otherwise noted.