Rapunzel (aka The Lost Princess, Blondie, Flower) is a character from the Walt Disney Animation Tangled movie. She may be used in:

Rapunzel is the first Disney Princess to appear in the game. She was first shown as a prototype, but then was confirmed by Disney Interactive at D23. In Disney Infinity 1.0 Rapunzel has three Character Chests, which unlock her Costume, the Frying Pan, and her tower.

For more quotes from this character, see Rapunzel/Quotes.

Rapunzel in the Toy Box 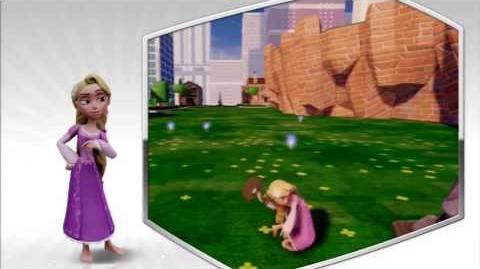 Retrieved from "https://disneyinfinity.fandom.com/wiki/Rapunzel?oldid=134740"
Community content is available under CC-BY-SA unless otherwise noted.