Rick Dicker is a Cast Member from Pixar's The Incredibles. He first appears in Disney Infinity 1.0 in the Incredibles Play Set.

He can be found at Superhero HQ alongside Edna Mode (and later Mirage) as a mission giver. He is later seen celebrating the victory over Syndrome with the Incredibles and their allies. 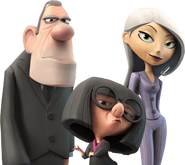 Rick with Edna and Mirage

Artwork of Rick.
Add a photo to this gallery

Retrieved from "https://disneyinfinity.fandom.com/wiki/Rick_Dicker?oldid=142904"
Community content is available under CC-BY-SA unless otherwise noted.