Start a Wiki
"Just don't call him a raccoon. He doesn't know what that is."
--Hall of Heroes statue inscription

Rocket Raccoon (alias 89P13) is a character from the Marvel Guardians of the Galaxy movie. He may be used in:

He was first revealed to appear in the game when he showed up with Groot during the Disney Infinity Marvel Superheroes Live Event. He was released September 23, 2014 and is sold separately. Rocket Raccoon is also a Crossover Character, and can be used in any of the Marvel play sets, once all ten (10) of his Crossover Coins have been collected in that set (except for the Marvel's Spider-Man Play Set).

Rocket Raccoon uses two Quantum Cannons for his ranged attack. These can also be upgraded to be chargeable. Rocket has a shoulder charge as his melee attack. He has a Tech ability, and can be upgraded to have a Super Jump.

For more quotes from this character, see Rocket Raccoon/Quotes. 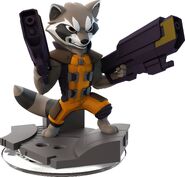 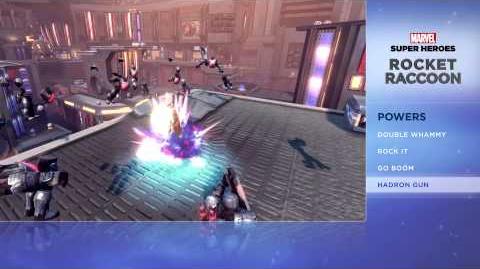 Retrieved from "https://disneyinfinity.fandom.com/wiki/Rocket_Raccoon?oldid=128543"
Community content is available under CC-BY-SA unless otherwise noted.