Sandy Claws Surprise is a Costume Change Disc which, when placed under Jack Skellington on the Disney Infinity Base, changes his appearance to his "Sandy Claws" outfit from The Nightmare Before Christmas, increases damage. It may NOT be used in Editions earlier than 2.0.

It also increases the damage inflicted by the player's attacks (regardless of type:  Melee or Ranged), which it does for any character who uses it. 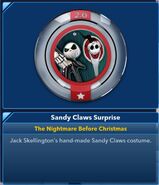 Jack wearing the outfit
Add a photo to this gallery
Retrieved from "https://disneyinfinity.fandom.com/wiki/Sandy_Claws_Surprise?oldid=135574"
Community content is available under CC-BY-SA unless otherwise noted.