While some of these skydomes are unlocked from the game itself, the majority of them come from using a special power disc that changes the sky when placed on the Disney Infinity Base. 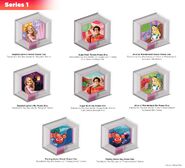 Several Customization Discs
Add a photo to this gallery
Retrieved from "https://disneyinfinity.fandom.com/wiki/Skydome?oldid=137833"
Community content is available under CC-BY-SA unless otherwise noted.