Sorcerer's Apprentice Mickey (aka Mickey Mouse) is a character from the Walt Disney Animation Fantasia, and was released exclusively to specific retailers. He may be used in:

"Mickey's Magical Escape" is added to the Disney Infinity 1.0 Adventures menu when the figure is placed on the Disney Infinity Base.
A limited edition version with silver stars instead of blue was given to 5,000 people at the D23 Expo. He was released in the UK on GAME and Amazon.co.uk on the 6th of December 2013.

He also serves as a host for the "Introduction to the Toy Box", along with the Toy Box Host.

He has 3 character chests which unlock the costume version of the figure, "Mickey's Spellbound Sky" skydome and the "Fantasmic Villains" townsperson pack.

Sorcerer's Apprentice Mickey is one of the most powerful characters in Disney Infinity. Mickey's ground pound causes brooms with buckets of water to appear very quickly when the move is activated. His attack ability is essentially multiple magic projectiles that wander somewhat, and bounces between enemies. He also has a magical sweep attack, letting out a strong burst of magic that pushes enemies back. His Special Abilities include "Marksman" and "Super Jumper".

For more quotes from this character, see Sorcerer's Apprentice Mickey/Quotes. 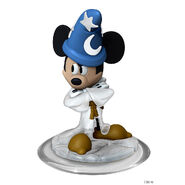 in the Toy Box with a group of Magic Brooms 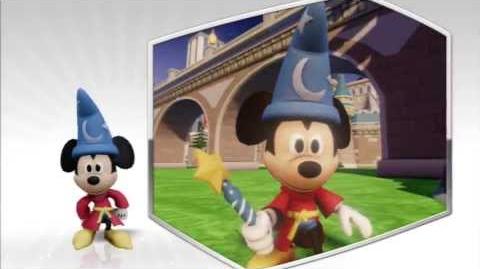 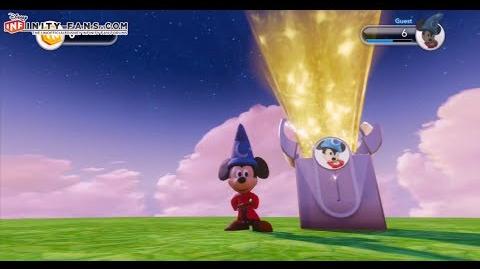 Retrieved from "https://disneyinfinity.fandom.com/wiki/Sorcerer%27s_Apprentice_Mickey?oldid=147825"
Community content is available under CC-BY-SA unless otherwise noted.