Star-Lord uses his Elemental Guns for ranged attack. For melee attack, he punches and kicks, and uses Shock Mines and the Hadron Enforcer for more powerful attacks. Star-Lord can place Turrets which attacks enemies in his Special Move. Star-Lord has a Super Jump and and the Tech ability.

For more quotes from this character, see Star-Lord/Quotes. 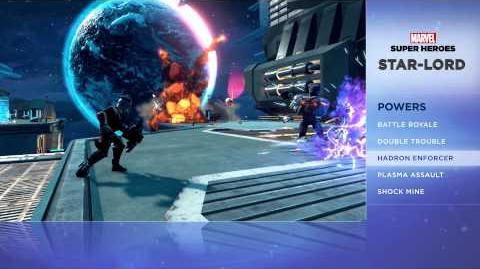 Retrieved from "https://disneyinfinity.fandom.com/wiki/Star-Lord?oldid=145354"
Community content is available under CC-BY-SA unless otherwise noted.