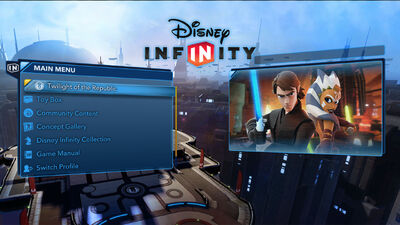 The Star Wars: Twilight of the Republic Play Set is part of Disney Infinity 3.0, and was released on August 30, 2015, at the edition's launch.[1] It is sold in the starter pack for the game, but is also sold separately. The Play Set Pack and Starter Pack both feature Anakin Skywalker and Ahsoka Tano, with Obi-Wan Kenobi, Darth Maul, and Yoda as separately sold figures. The Play Set's storyline is based on Star Wars: The Clone Wars as well as the three prequel trilogy films in the Star Wars saga.

Set between Star Wars episodes II and III,[2] the Play Set takes you on an adventure through the Clone Wars-era galaxy to stop Darth Maul and the Separatists. A Battle Droid factory on Geonosis has been activated, and the Jedi are on a mission to find out who activated it, and why. The Play Set takes you to four different planets (Geonosis, Tatooine, Coruscant, and Naboo) to battle the Separatist forces and save the galaxy.

To create the Twilight of the Republic Play Set, Disney Interactive brought in Ninja Theory, the gaming company behind games like Devil May Cry and Heavenly Sword.[3] They were tasked not only with the play set's creation, but also with smoothing out the game's combat mechanics.

At first, Studio Gobo was tasked with this play set and Ninja Theory with the Rise Against the Empire Play Set. This changed when Studio Gobo came to the Disney team and reminded them that they had been working with Vehicles in their games for a long time. This was where the team realized that they had brought Ninja Theory on board to work with the lightsaber combat, but they had put them in the play set focused on vehicles, and that Gobo were vehicle specialists, but they had put them in the play set driven by lightsaber combat. This prompted the team to switch developers on the play sets.[4]

The play set in the starter pack of Disney Infinity 3.0

Anakin, Ahsoka, Obi-Wan, and Yoda in the play set.

Promotional artwork of Anakin and Ahsoka.