Stitch (aka Experiment 626) is a character from the Walt Disney Animation Lilo & Stitch, and is included in the Toy Box Starter Pack. He may be used in:

He was seen during a trailer at the Disney Infinity Marvel Superheroes Live Event, and was later revealed to be playable by a leak from Walmart. He was confirmed later by Disney with the title "Bring on the Mischief". He also appears on the Hangin' Ten Stitch With Surfboard in Disney Infinity 1.0. He was released on November 4, 2014, in Wave 1. [1] On February 10, 2015, Target released an exclusive collector's edition.

Stitch has a blaster in his ranged attack, which can be upgraded to be dual-held. In his melee attack he punches enemies, and has the ability to curl up into a ball and roll into them. In his Special Move, he grows two extra arms and uses four blasters at once. Stitch has Maximum Strength and Wall Crawl, and can unlock Super Jump in the Skill Tree.

Stitch has his own Toy Box Game, called Stitch's Tropical Rescue. It is similar to the Assault on Asgard Toy Box Game.

For more quotes from this character, see Stitch/Quotes. 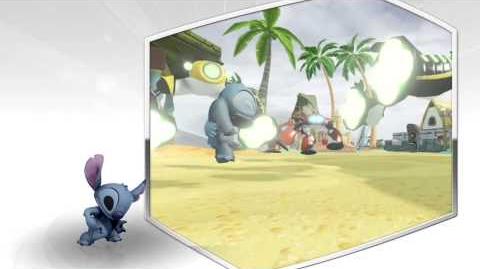