Sulley (aka James P. Sullivan) is a character from the Pixar Monsters, Inc., and is included in the Disney Infinity Starter Pack. He may be used in:

Sulley was released on August 18th at launch.

Sulley has the same Basic Abilities as, and shares a number of Common Skills with, other playable characters.

Skills for Sulley [4] include the following:[5]

Sulley does not have any Skills that use the Special Move meter.
For a complete Skill Tree, see Sulley/Skills.
For Disney Infinity 2.0 and 3.0, a Skill Tree calculator for Sulley can be found here.

"Infinite Sulley" was produced as part of the Disney Infinity 1.0 product line, as a special "crystal" (translucent) version of the character figure. It was released on October 11 in Canada and on October 13 everywhere else exclusively at Toys "R" Us.

For more quotes from this character, see Sulley/Quotes. 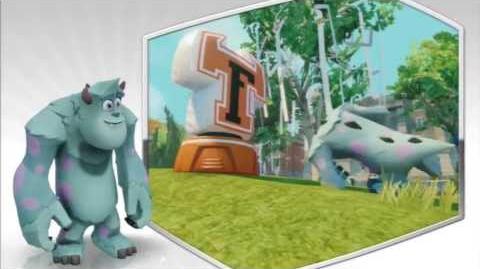 Retrieved from "https://disneyinfinity.fandom.com/wiki/Sulley?oldid=147633"
Community content is available under CC-BY-SA unless otherwise noted.