SuperMax Prison is first available in Disney Infinity 1.0. It is obtained from and can be placed in the Incredibles Play Set.

Where to find in the Toy Box Editor:

It serves as the prison where Baron Von Ruthless, Snoring Gloria, and The Hoarder are incarcerated. Every time one of them is defeated in the Play Set, they appear inside a prison cell from that point onward. 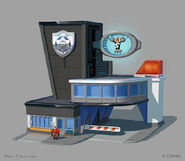 The SuperMax Prison in the "Metroville Exhibition" Toy Box Save

The prison, at far right.
Add a photo to this gallery

Retrieved from "https://disneyinfinity.fandom.com/wiki/SuperMax_Prison?oldid=133711"
Community content is available under CC-BY-SA unless otherwise noted.