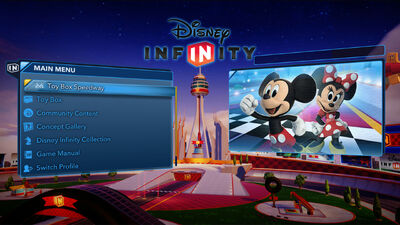 Toy Box Speedway is one of two Toy Box Expansion Games in Disney Infinity 3.0. It was released on October 13th, 2015 and in some countries October 23rd 2015.[1] The game is sold separately from the other Disney Infinity games, packaged by itself.[2]

Toy Box Speedway is a racing game heavily inspired by Mario Kart, but with Disney's characters and Ground Vehicles. The player is allowed to choose any playable Disney Infinity character and any Disney Infinity Ground Vehicle they choose to participate in a race, which takes place on one or more Disney-themed tracks.[3]

The game's hub is modeled on a stunt arena, where the player can simply show off and do tricks.[4] There are four Disney Infinity Carts ready for selection, as well as two Vehicle Summoner pads where a player may select from any Ground Vehicle they've unlocked for the Toy Box. Any Ground Vehicle Power Disc from any edition of Disney Infinity may also be used.[7] There is also a Host which can be interacted with for a brief tutorial on driving a Ground Vehicle.

There are several racing modes:

Each mode first asks players to select their engine size, which affects their Ground Vehicle's performance during the race and effectively the difficulty level. The choices are 50cc (easy), 100cc (medium), and 250cc (hard).

There are nine tracks in Toy Box Speedway: six Disney, one Pixar, one Marvel, and one Star Wars. These can be selected individually in any gameplay mode, and can also be selected in sets of three as a Grand Prix in Race or Battle Race (but not Time Trial), where each race must be completed in sequence. Six drivers compete in each race, including one or two players, with the rest consisting of randomly selected Disney Infinity characters driving randomly selected Ground Vehicles.

There are many power-ups that can be used in the game. There are many variations of Vehicle Weapons that can be used, as well as some totally new power-ups. Known power-ups are a simple Speed Boost, variations of Machine Guns and Impact Mine, the Leader Beater (which automatically takes out the leader, the Oil Slick, and even an unnamed power-up that turns all of your opponents' Ground Vehicles into jalopies.[5]

In a later interview, Millard said that while he was a fan of the Disney Infinity games, he always felt that the driving controls were not as responsive as they could be. Thus, the first thing the team at Sumo did for the game was to change the driving controls to make them more responsive. According to Millard, their goal was to make the game so that it played like Mario Kart in terms of controls.[3] 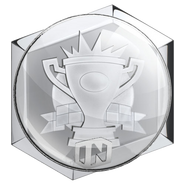 Several characters racing on the Dunes of Tatooine track

Retrieved from "https://disneyinfinity.fandom.com/wiki/Toy_Box_Speedway?oldid=143085"
Community content is available under CC-BY-SA unless otherwise noted.