Ultron is a character from the Marvel Avengers: Age of Ultron. He may be used in:

He is a playable character in Disney Infinity 3.0, as confirmed at E3 on June 16th, 2015, and appears in the Marvel Battlegrounds Play Set. He was first seen in a promotional image for the game alongside Hulkbuster Iron Man, and was confirmed to appear in the game on Toy Box TV [1] and was released on November 2, 2015 in the US. [2]

Ultron will be able to summon droids and will magnetically draw enemies to him and then shoot them. [3] For his long ranged attack, he will have a "wave of destruction".

Ultron has a beam and can fly and a Super Move to summon his Ultron Drones that will attack anything he attacks.

For more quotes from this character, see Ultron/Quotes. 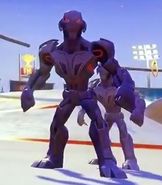 Retrieved from "https://disneyinfinity.fandom.com/wiki/Ultron?oldid=141076"
Community content is available under CC-BY-SA unless otherwise noted.