Venom (alias of Edward Charles Allan Brock, aka Eddie Brock) is a character from the Marvel Spider-Man series. He may be used in:

He was confirmed to be playable in a Target advertisement showing off the game. He is playable in Marvel's Spider-Man Play Set and the Toy Box. Venom was released at launch, as a solo figure for the Play Set.

Venom uses Web Bolts as his ranged attack, similar to Spider-Man. With these he is able to stun enemies, or drag them towards him. He uses powerful symbiote punches in his melee attack. Venom's Special Abilities include Marksman, Maximum Strength, Super Jumper, Wall Crawler, and Villain. He can also unlock Heightened Senses and Slinger.

For more quotes from this character, see Venom/Quotes. 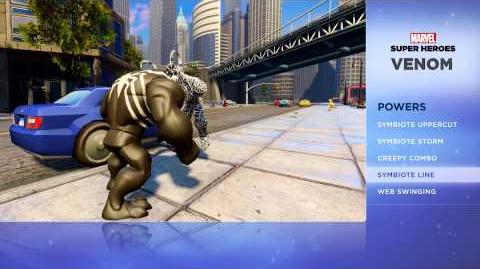 Retrieved from "https://disneyinfinity.fandom.com/wiki/Venom?oldid=146561"
Community content is available under CC-BY-SA unless otherwise noted.