Vision (aka The Vision) is a character from the Marvel Avengers series. He may be used in:

He is a playable character in Disney Infinity 3.0. Images of his figure were leaked by Amazon.com on October 13, 2015 alongside the long-rumored Ant-Man as well as Black Panther. On January 16th, 2016, another leak on the website of New York City-based photo and video equipment store, B&H Photo Video, showed off high quality versions of Vision, Ant-Man, Black Panther, the Marvel Battlegrounds Power Disc Pack, and Baloo.[1]

Vision has the ability of Flight, and can fire a sustained energy beam from the gem on his forehead (the "Mind" Infinity Stone), which can be swept to hit multiple targets. His Special Move is to become heavier, giving him more powerful attacks, increased defense and longer distance jumps,

For more quotes from this character, see Vision/Quotes. 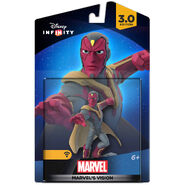 in-game with Thor and Captain America

Retrieved from "https://disneyinfinity.fandom.com/wiki/Vision?oldid=140196"
Community content is available under CC-BY-SA unless otherwise noted.