Wart's Sword is an pack in the game. It is a pack that acts as a weapon. It originates from The Sword in the Stone.

It can be obtained by 'using' The Sword in the Stone Set Piece with a level 10+ character. This causes the sword to permanently appear in that particular character's selectable packs within the Toy Box. This must be repeated individually for each level 10+ character.

It is important to note that the option to 'use' The Sword in the Stone only appears after approaching the object with a level 10+ character, and still appears after the character has obtained it.

Crystal figures also get the pack straight away (Sulley, Mr. Incredible, Jack Sparrow, Lone Ranger, and Buzz Lightyear). But the cars such as Lightning McQueen cannot have this pack, as they are cars.

Sulley with the sword. 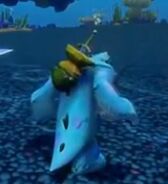 Sulley with the sword

Concept art of the sword.
Add a photo to this gallery
Retrieved from "https://disneyinfinity.fandom.com/wiki/Wart%27s_Sword?oldid=90944"
Community content is available under CC-BY-SA unless otherwise noted.