Disney Infinity Wiki
Register
Don't have an account?
Sign In
Advertisement
in: Disney Infinity 3.0, Available in 3.0, Star Wars: Twilight of the Republic,
and 6 more

Yoda (aka Master Yoda) is a character from the Lucasfilm Ltd. Star Wars film series. He may be used in:

He was available at launch.[2] He was confirmed playable on Toy Box TV,[3] but was first seen on the leaked image of the box art for Disney Infinity 3.0.[4]

Yoda fights using his trademark green lightsaber. He is Force sensitive, and as such, he possesses every basic Force ability, along with some others accessible through his Skill Tree. Among these Force abilities are Small but Swift (which causes Yoda to do many attacks while running quickly at enemies), Power of the Force (which causes Yoda to create a giant Force whirlwind that picks up and damages enemies), and the ability to deflect blaster shots back to an attacker. Among his other abilities are a Super Jump, a Block Breaker, and an Air Assault. His Force Ability is Master in Motion, which causes him to jump onto a nearby enemy, attack it, and then keep bouncing from enemy to enemy until his Special Move Meter runs out.

When the developers of Disney Infinity 3.0 created Yoda, they wanted him to play like his younger self from Star Wars: The Clone Wars rather than the incarnation of himself from Star Wars episodes V and VI, the old Yoda with a cane. They wanted him to be able to perform wild lightsaber attacks like he did on the show. Because they wanted his abilities to reflect his younger self, they designed his appearance to reflect that version of him as well. However, they did not simply want to do an exact copy of his Clone Wars appearance, as this would appear too similar to the show, and have nothing that made it uniquely Infinity. Yoda was a difficult character for the team to design because of his many different looks over the years. At first, Disney tried to design Yoda to resemble his older self, as seen in some of his concept art, but they decided against that. Eventually, they took the best elements from each version of Yoda and combined them to create the final product.[5]

Yoda's eyes on his figure are made of two pieces of plastic, separate from the rest of his body.[5]

For more quotes from this character, see Yoda/Quotes. 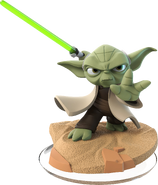 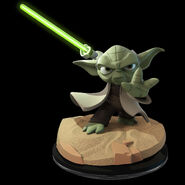